My Name is Robert Smith, and I am retired and living in Venice, California in the Winter and Summer and in McKinney, Texas in the Spring and Fall. This way my wife and I can spend part of each year with both of our children and our grandchildren.

I have been collecting photographica for over 35 years but recently it has evolved into 3D related items. Cameras, Stereo Viewers and Stereoviews.  I also take steroviews  with a Fuji digital stereo camera and a 1930's Rolleidoscop.

Among my Steroviewers, the Taxiphote, with all of its engineered brass mechanisms is one of my favorites. Shown on the left is a crank operated viewer while on the right I built a plexiglass housing for a lever operated model. See other viewers on the Stereo Viewer Page. Click on the images below to see some glass views for the Taxiphote that show the Citroen Showroom and Factory and a Movie making fishing trip and a Wyoming camping and hunting trip.

John P. Soule of Boston bought 260 or so stereo negatives from M.M. Hazeltine and possibly other photographers in 1870 of Yosemite and other California scenes. See my collection of Soule California Views on the Soule/Houseworth page.

Thomas Houseworth was a San Francisco  Photo publisher in the 1870's. He either hired photographers or bought negatives from photographers such as M.M. Hazeltine. The Soule/Houseworth page compares these views 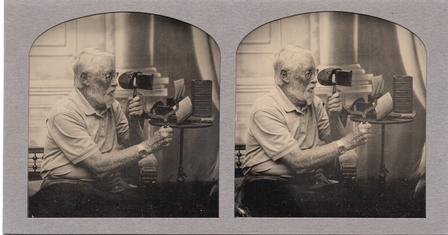 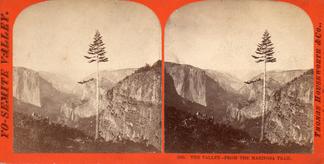 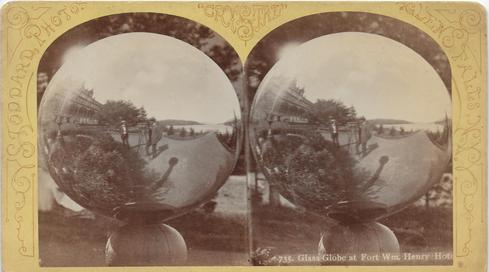 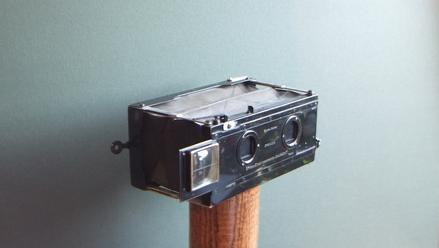 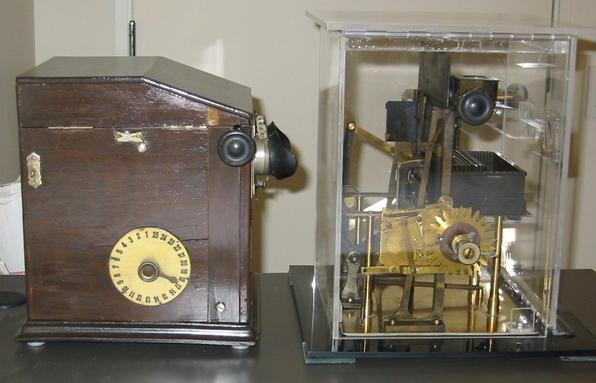 Stoddard's self portrait  with stereo camera reflected in mirrored globe.

Tintype stereoview of me taken by C.A.S. Tintypes at 3D Con in August 2017 in Irvine CA.

Click on the Stereoview above to see some of my views of Yosemite Hotels and Geyser Hotels by Various Photographers and Publishers.

This Block Note camera cocks the shutter by shifting the lens plate. See a portion of my collection. including slide shows in analyglyph 3D on the Camera Page.

In 1876  J. J. Reilly partnered with M. M. Hazeltine in Yosemite. At the end of the season these two exchanged some of their negatives. The next year Hazeltine was in Yosemite and this was followed in subsequent years by Walker and Fagersteen and later just  Fagersteen. These former assistants of Reilly sometimes utilized existing Hazeltine card stock and overprinted their names. Fagersteen also utilized Reilly and Co. card stock and rubber stamped his name on the back. Click on the image to see examples. Although Hazeltine seldom was given photo credit for Soule or Houseworth images, it is ironic that these Walker and Fagersteen views overprinted on Hazeltine cards appear to be Reilly images. Go to the Reilly Page to see My Reilly Stereoviews.